Jean and Wayne’s accomplishments in this magnificent breed are recognized around the world. Rivergroves Great Pyrenees dogs and bitches have been incorporated into multiple breeding programs in the US as well as Canada, Japan, England, Sweden, Belgium and Mexico. 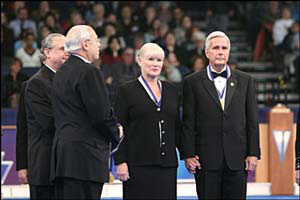 Rivergroves dogs are bred with superior soundness of mind AND body that exemplify the Great Pyrenees breed standard. As breeders with a profound understanding of the importance of correct structure, temperament and health, Rivergroves fully supports the Canine Health Foundation and CHIC, knowing that a successful, on-going breeding program is not possible without sound, healthy animals.

The impact that the Rivergroves dogs have left on the breed is reflected in their accomplishments. Rivergroves has, and continues to produce, wonderful, versatile Pyrs which we see not only in the show ring, but in obedience, in therapy work and simply as cherished, highly compatible companions in people’s homes. The results are dogs which will be remembered throughout the generations in the history of this breed. This is obvious testimony to Wayne and Jean’s tireless work and effort as breeders and their endless commitment to this breed.

People who own Rivergroves dogs can readily attest to the success that these two dedicated individuals have enjoyed, and the impact they have as breeders which continues to this day. A brief history of Rivergroves is below:

Jean’s love of dogs began at a young age. At the tender age of 10, Jean started competing in AKC events with her first show dog, a Great Dane, and has been showing ever since.

In 1966, Jean was a founding member of the Great Pyrenees Club of Michigan and purchased her first Great Pyrenees, which she successfully trained in Obedience earning her Am. CD, CDX, and Can. CD. 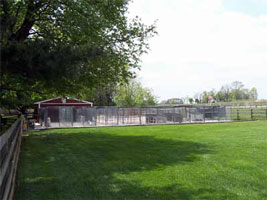 In 1970, Jean purchased Ch. Poco Pyrs King Crusher which became her first Best In Show dog, and in 1973 she purchased Ch.Tip’n Chips Sonny’s L’Air. These two Pyrs became her foundation stock. They produced fifteen champion get , including Jean’s very first home-bred Best In Show dog, Ch. Rivergroves Crusher’s Re-Run. From these two very special foundation dogs, Rivergroves has been able to retain and build upon the genetic success which carries through to the Rivergrove dogs to this very day.

In 1977, Jean married Wayne Boyd, and she and Rivergroves moved to Maryland. Wayne brought expert handling skills to the partnership, and they very quickly became a formidable and well-respected breeder/owner/exhibitor team.

Wayne showed their Bullmastiff, Ch. Huck’s Last Hurrah Of Bandog “Freddie”, which was the first multiple champion Bullmastiff in the history of the breed. They also owned and showed Freddie’s grandson, Ch. Bandog’s Crawdaddy Gumbo “Waldo”, and he is still the top winning Bullmastiff of all time with 37 Best In Shows. Handled by Wayne, he was the #1 Working Dog and #2 All Breed. Wayne won the Quaker Oats Award that year, for “Most Working Dog Group 1 Wins” due to his and Waldo’s success.

Some of Rivergroves’ Best known winners are: 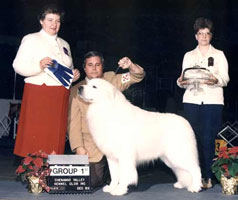 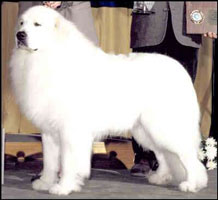 Top Winning Great Pyrenees of All Time in Canada with 112 Best In Shows
In the USA, Looker won Multiple Best In Shows, Multiple BOB’s at Westminster KC including a Group 2 and a National Specialty BOB.

• Ch. Rivergrove For Your Eyes Only (Bond) - Top Producing Sire of All Time with 70 champions. 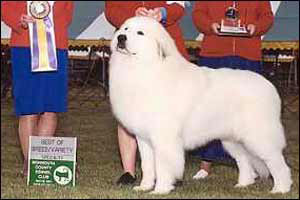